Imagine if Apple had to run like a nonprofit

Many people comment on how a nonprofit should be run like a business, but what would happen if a business was expected to run like a nonprofit, with the expectations that the public has of a nonprofit? Vu Le, Executive Director of Ranier Valley Corps, and blogger for the nonprofit world (Nonprofit…and Fearless), has imagined this in a recent blog posting.

Imagine if Apple had to run like a nonprofit 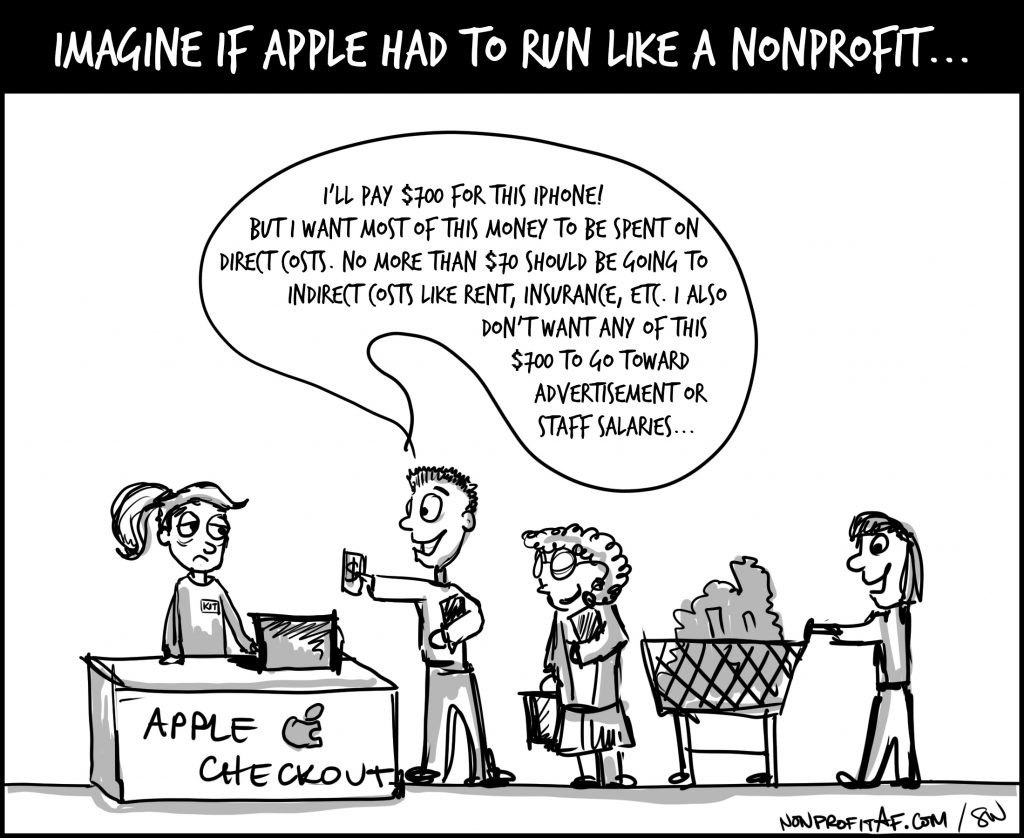 We nonprofits deal with unique challenges that our for-profit colleagues never have to think about. If you ever sat in the dark for hours listening to REM and eating Otter Pops and wondering what it would like for a large for-profit like Apple to have to run like a nonprofit, wonder no more! I’ve done it for you this week! (What, like your vacation is so much more interesting). And I asked NAF’s web designer and artist, Stacy Nguyen, to draw up some comics.

Customer: Hi, I’d like to buy this latest iPhone. How much is it?

Customer: Here you go. But I want most of this money to be spent on direct costs. No more than $70 should be going to indirect costs like rent, insurance, etc. I also don’t want any of this $700 to go toward advertisement or staff salaries.

Apple employee: We’ll designate these restrictions in our systems.

Customer: At the end of the year, I’d like a report on what you spent this money on.

Apple employee: We provide quarterly financial reports, and would be glad—

Customer: No no no. I don’t want the financial reports on your entire company. I only want a report on what my $700 specifically was spent on. Only my $700.

Meeting with a key shareholder:

Tim Cook, CEO: As you can see, this quarter we surpassed our sales goal, moving over one million units, which is 15% more than we had anticipated.

Shareholder: Congratulations, that’s really wonderful to hear. But…that’s more like an output. What are your outcomes?

Tim Cook: I’m glad you asked! Of the one million iPhones we sold, over 223,000 people used their phones to update their resumes and applied for jobs. Of that population, almost 15% then actually got a job. Meanwhile, about 115,000 seniors buy our phones, and surveys indicate that nearly 7% use their phones to go on to WebMD after they fall and break their ankle. Our phones allow these seniors to figure out how to create makeshift tourniquets for their broken ankles, which prevents them from going to the emergency room, which saves taxpayers about $1.7 million.

Tim Cook: Our phones have also reduced crimes by 30% in some cities, since teenagers and young adults have been using their phones to take naked butt selfies, or NBS, and to look at viral cat videos instead of robbing banks, starting gangs, or committing other crimes.

Tim Cook: Would you consider renewing your stocks this coming year?

Shareholder: I’ll have to consult with the family, Tim. Our investment priorities might change this year. I’ll let you know in 9 months. But to be honest, the ROI seems kind of low with only 15% finding jobs and 7% of seniors using their iPhones to learn how to make tourniquets after they break their ankles… 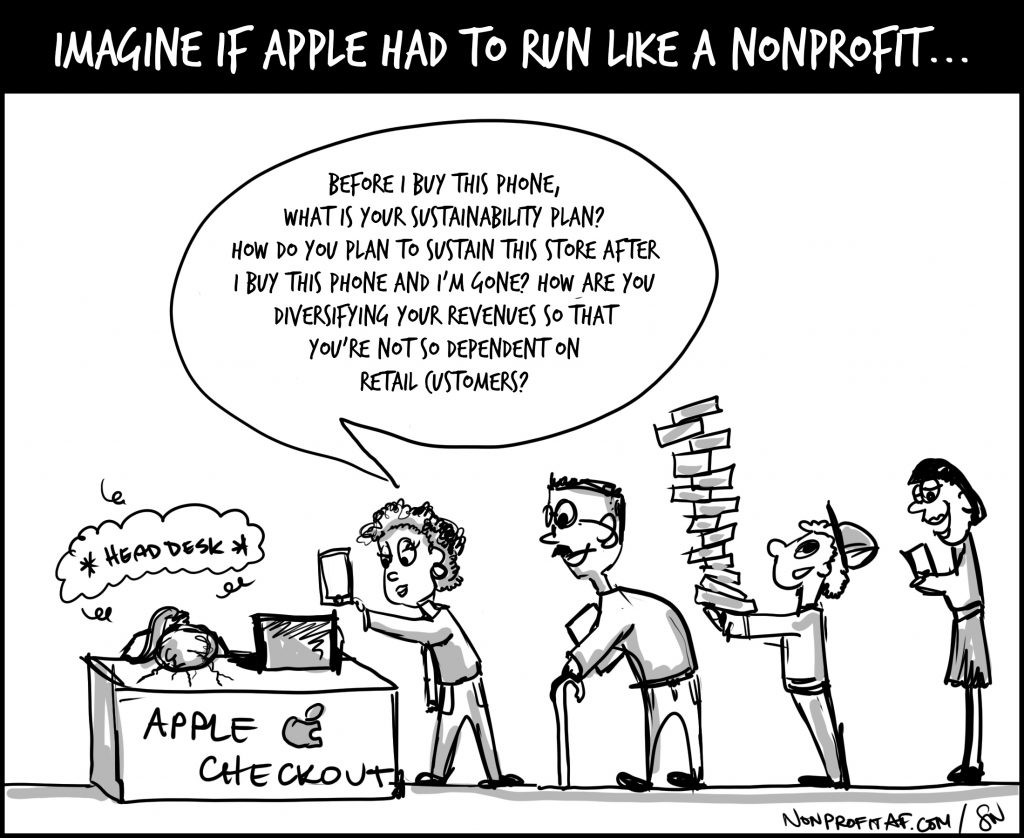 Customer: Hi, I’d like to buy the iPhone 8 Double Plus.

Employee: I can help you with that. What color would you like? We have black, white, or Burnished Coral?

Customer: Black. But before I buy this phone, what is your sustainability plan? How do you plan to sustain this store after I bought this phone and I’m gone? How are you diversifying your revenues so that you’re not so dependent on retail customers?

Employee: Well, we are courting government contracts, as well as developing relationships with, uh, local and national, um…

Customer: Sorry, it doesn’t seem like you’ve thought much about sustainability. It’s for Apple’s own good to diversify its revenues and not be so dependent on its customers. I’ll buy a phone later when you have that figured out.

Tim Cook: Investors are breathing down my neck about our outcomes. We need to increase the number of people, especially seniors, who use our iPhones to look things up after falling and suffering injuries. What ideas do you all have?

Angela, CFO/COO/CTO/Janitor: Our R&D is working on a feature that would automatically alert emergency services when a senior falls.

Tim Cook: Excellent. How is that going?

Angela: Only 340 customers are allowing a portion of their iPhone payments to be used on Research and Development. So we’ve been short-staffed. In fact, our entire R&D department is basically just Eduardo, who graduated last month with a Master’s in Botany, but he took several online courses on coding.

Eduardo, SVPR&D: If you think about it, plants and phones are actually a lot alike.

Tim Cook: OK…let’s keep working on that feature. Meanwhile, how is the gala planning coming along?

Steve, DD/SVPCom/QA/HR: Better than we thought, boss! Listen to this, after a bunch of discussion at the last event planning meeting, we finally came up with a cool name for the gala. At first, we thought we would just call it “The Apple Gala.” But then we thought, why not be a little cheeky and fun. So now we are calling it…“The Gala Apple.”

Steve: Gala is a type of—

Tim Cook: I know what gala apples are! How is recruitment for table captains coming along?

Steve: We have 5 captains confirmed. Zuck says he can’t captain, but he’ll raise his paddle at the $1,000 level during the ask.

Customer: Hi, I heard that you are asking for donations of gently-used lightning cables?

Apple employee: Yes, it’s for our initiative to provide charging cables to low-income individuals during the holidays

Customer: Well, I don’t have any lightning cables. But, I got a box of clothes hangers and twelve cans of beets I bought five years ago that I never got around to eating.

Employee: I’m not really sure we can use those…

Customer: I’m sure you can. Poor people love beets. I already dropped it off in your donation box. If you could send me a tax receipt, that would be swell!

Tim Cook’s Mom: How is your job going, Timmy?

Tim Cook: It’s great, Mom. It can be stressful, but really rewarding. Our iPhones support thousands of people as they look for jobs. They also reduce crime and save taxpayers money, and help a lot of seniors when they fall and sprain their ankles.

Tim Cook’s Dad: Are you making enough money? Are you doing OK? Your mother and I are kind of worried about you, son. When will you find a real job?

Tim Cook: Mom, Dad, we’ve been through this. I’m not going to get a “real job.” Helping people IS. A. REAL. JOB! I’m making a difference in the world!

Tim Cook’s Dad: All right, no need to get defensive.

Tim Cook: I’M NOT DEFENSIVE!!!…Look, will you come to the Gala Apple next month? You can get a better picture of the work I’m doing.

Tim Cook’s Mom: We’ll check our calendar, honey. It might be your cousin’s housewarming party. Such a nice house. He’s a lawyer, you know. Have you seen his NBS at the Grand Canyon?

This blog posting was first printed June 26, 2017. It is reprinted/republished with permission. http://nonprofitaf.com/contact/